The overseas soldiers in the Second World War

Soldiers from Overseas during the Second World War In his address given in Libreville, in the Gabon, on the 7th June 1963, on the inauguration of the monument to Captain N'Tchoréré (a volunteer in 1914-18, taken prisoner with his company on the 7th June 1940 near Amiens, he was shot at point blank range by German soldiers, after demanding the right to be treated as a French officer), the French ambassador emphasised the weight that the sacrifices made by soldiers from overseas had lent to the direction taken by General de Gaulle at the head of the Free French (la France Libre). From the French campaign, which started on the 10th May 1940, to the epic role of the tirailleurs and tabors in re-conquering our country, not forgetting the example shown by Félix Eboué, the governor of Chad, in mustering up support for the France Libre in August 1940, the part played by all those known by the term "indigenous" left a lasting mark in people's minds. This article looks back on the action of these soldiers during the conflict, through some examples of places of remembrance that keep alive the memory of those who died far from their homelands.

It was during the conquest of Algeria that "tirailleurs" and "spahis" were introduced into the French army. The royal orders of the 7th December 1841 recognised the existence of "indigenous troops", classifying them by giving them a status in line with that of other corps of the army. The imperial decree of the 10th October 1855 created the first three regiments of Algerian tirailleurs, followed by that of the 21st July 1857, creating the first unit of Senegalese tirailleurs to be incorporated into the marine infantry. Under the 3rd Republic, the Tunisian (1884), Indochinese (Annamite and Tonkinese, in 1884), Madagascan (1895) and Moroccan (1915) tirailleurs emerged.

During the Great War, along the French and Belgian fronts and those in the East and in Africa, these units swelled enormously due to the influx of men taken from the colonies. Several new units were formed, including the battalion of tirailleurs from the Pacific created on the 4th June 1916 in Noumea. In the 1920's, some of these troops fought in Morocco, in the Rif and in the Levant.

When war broke out in 1939, contingents mobilised throughout the Empire came to strengthen units of the active army, still divided into two categories of troops: those of the army of Africa whose emblem was the crescent and those of the colonial army with the naval anchor. In the army of Africa there were therefore North Africans (Algerians, Tunisians and Moroccans) and in the Colonial one, black people from French western and equatorial Africa and from Madagascar, the West Indies, Guyana, Reunion, New Caledonia and Polynesia, Somalia, India and Indochina, all united under a single flag.

In May 1940, out of more than 5,345,000 mobilised troops, there were about 300,000 North African soldiers and around 300,000 from the "colonies". However, on mainland France there were only 95,000 North African and 50,000 colonial troops. On the French front, general army headquarters set up nine divisions of colonial infantry (divisions d'infanterie coloniale or D.I.C.) where Senegalese soldiers were amalgamated with infantrymen of the R.I.C., known as the marsouins (porpoises), and with artillerymen from the divisional field regiments (régiments d'artillerie divisionnaire de campagne or R.A.D.C.). They also created units of colonial fortified sector machine gunners (the 42nd Madagascan half-brigade and the 52nd and 55th Indochinese half-brigades) and regiments of Senegalese pioneers. From the North Africans, they trained four divisions of African infantry (divisions d'infanterie d'Afrique or D.I.A.), seven North African infantry divisions (divisions d'infanterie nord-africaines or D.I.N.A.), a Moroccan (division marocaine or D.M.) and three brigades of spahis, Algerians and Moroccans. Soldiers from of the Empire fought with determination in all sectors along the front, sustaining heavy losses: the North Africans at Gembloux, in Belgium and during the defence of Lille, in the Meuse, the Oise, the Aisne and along the Loire; the Madagascans in the Ardennes; the Senegalese in the Somme, the Meuse and the Aisne, in Champagne and in the Rhône; the Indochinese in the Ardennes, in the Eure and in the Côte d'Or.

They were also the victims of crimes by the enemy, in the form of summary executions of prisoners on the very battlefields themselves: Senegalese from the 53rd mixed Senegalese colonial infantry regiment (régiment d'infanterie coloniale mixte sénégalais or R.I.C.M.S.) at Airaines and at Dromesnil (Somme), Senegalese from the 25th R.T.S. at Chasselay (Rhône), Moroccans at Febvin-Palfart (Pas-de-Calais) to quote just a few examples. In addition, on the 19th August 1940, the occupying forces enacted an order prohibiting the "touching of tombs of black soldiers, decorating their graves or moving their bodies etc.". The question of continuing the fighting from the Empire was raised at the darkest hours of the invasion. It was resolved with the armistice signed by Marshal Pétain.

However, not everybody was behind this decision. For the first resistance fighters, the Empire was, from the month of June 1940 and General de Gaulle's appeal onwards, a base for the reconquest of their country. Over the course of the war, it became a major strategic issue, as much for the supporters of Vichy as for the Gaullists. The continuation of the fighting and the outcome of the conflict depended on it. In France, in the period following the armistice, tens of thousands of soldiers from the Empire died at the hands of the enemy who interned them in France in camps called "Frontstalag". Many of them escaped to join the Résistance and thus take part in the Liberation in 1944.

The Empire in the fight for liberation

Following the allied landings of November 1942 in North Africa, French forces took part in the Tunisian campaign alongside the Anglo-Americans. These forces comprised of troops from the army of Africa, under the command of General Juin, and Free French Forces (General de Larminat's 1st DFL of and L force commanded by General Leclerc). But it was above all the liberation of Corsica, the arrival in Rome and the landings in Provence that constituted the major feats of arms of French troops in 1943-1944.

During the Italian campaign, the French expeditionary corps (corps expéditionnaire français or C.E.F.) who fought alongside the Allies was composed of two Moroccan divisions, an Algerian infantry division and two groups of Moroccan tabors and the 1st DFL. After the taking of Rome on the 4th June 1944 and Sienna on the 3rd July, troops were relieved and withdrawn from the front during July to be incorporated into the B army (what would become the 1st French army) commanded by General de Lattre de Tassigny, in order to land in Provence in August 1944.

So, when the 1st French army liberated Provence, it comprised several units made up mostly of men from the colonies: battalions of marine infantry (bataillons d'infanterie de marine or B.I.M.) trained in Black Africa, the B.I.M. of Chad, the B.I.M. of the Pacific, the Somali B.I.M., regiments of Senegalese tirailleurs, Algerian and Moroccan spahis, regiments of Tunisian, Algerian and Moroccan tirailleurs and commandos from Africa, where natives and whites were amalgamated, not forgetting the Moroccan goumiers who had already fought in September 1943 for the liberation of Corsica. Africans also served in the regiments of colonial infantry of Morocco (régiments d'infanterie coloniale du Maroc or R.I.C.M.), the colonial regiment of tank chasseurs (régiment colonial de chasseur de chars or R.C.C.C.) and the regiment of colonial artillery of Morocco (régiment d'artillerie coloniale du Maroc or R.A.C.M.).

Having landed in Normandy on the 1st August 1944, General Leclerc's 2nd D.B. liberated Paris before pushing on towards Strasbourg with, in its ranks, some "indigenous" soldiers from a foot regiment of Moroccan spahis, a North African artillery regiment and a colonial field artillery regiment. All these troops were involved in harsh battles in the Franche-Comté, the Alsace and the Vosges, before breaking through into Germany and Austria. Units from North Africa and the 2nd D.B. also formed part of the army detachment on the Atlantic front and took part in reconquering the Pointe de Grave and reducing the Royan pocket in 1945.

At the time of the liberation a feeling of deep gratitude towards the colonies predominated. The Guyanese MP Gaston Monnerville eloquently expressed this view in front of the consultative Assembly on the 25th May 1945: "Without her Empire, France would just be a liberated country. Thanks to her Empire, France is a victorious country". In the climate at the time, no political figure would have dared to suggest abandoning the smallest fragment of the Empire. However, the conflict had contributed in strengthening the nationalist movements and their influence and after 1945, a rift soon appeared between the national protests and the French desire to maintain the unity of the Empire intact, already foreshadowing the Wars of Independence of the Fourth Republic.

Several necropoles received the bodies of soldiers from the Empire who died for France during the Second World War.

Exhumed from their temporary tombs, they were reburied in plots of 1939-45 graves in the 1914-18 national necropoles, in military areas within civilian cemeteries and in the large relocation necropoles created between 1950 and 1975. These included Chastre in Belgium, Haubourdin and Zuydcoote in the Nord, Floing in the Ardennes, Condé-Folie in the Somme, Sigolsheim in the Alsace, Rougemont in the Franche-Comté, Cambronne-les-Ribécourt in the Oise, Luynes and Boulouris in Provence and Fleury-les-Aubrais in the Loiret etc.

Their tombs are decorated with one of the following religious emblems: a Latin cross, Muslim stele, or the stele of the "free thinker", the latter, bearing no religious mark, being the one most often chosen for animists.

Some cemeteries have a very individual appearance, such as the one for Moroccan tabors located in Saint-Florent (Upper Corsica), or that for North Africans in Airvault (Deux-Sèvres), but the most unusual remains the "Senegalese Tata" in Chasselay (Rhône): it resembles the sacred compound, the "tata", where, in this part of western Africa, the warriors who die in combat are laid to rest. 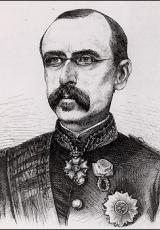