He is just 41 years of age in 1943, when de Gaulle chooses him to carry out a vital mission: the liberation of Paris. A Free Frenchman from the outset, Philippe Leclerc de Hautecloque is renowned for his daring and ability to change the course of events. 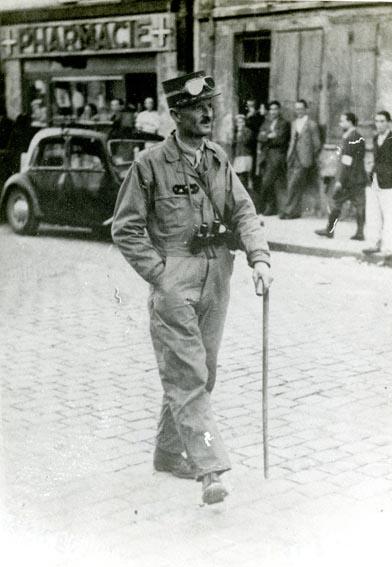 Born into a family of landed gentry in Belloy in 1902, he chooses a military career. At the Saint-Cyrien Military Academy, Hauteclocque is seen as an officer with a brilliant career ahead of him, rising to Captain in 1934 and Major of the War Academy in 1939. He has occupied posts in the command staff and chosen to serve in Morocco (1926-1930). A man of action, he has also participated in pacification operations. As an instructor of Moroccan officers at the Meknès Military Academy, he forged lasting friendships with his trainees. In the 1930s, he discovers the workings of the Nazi régime through his cousin Xavier de Hauteclocque—a reporter in Germany—and understands the threat posed by Hitler. After being taken prisoner in the “phoney war”, he escapes and resumes combat. He is injured and evacuated under orders but once again escapes from captivity.

Rejecting the occupation because he is a free spirit who cannot tolerate subservience, he repudiates the sacrosanct principle of total obedience that reigns in the army on grounds of patriotism and decides to join General de Gaulle in London. Although married with children, his wife encourages him in his plans and remains in France to look after their six children. To protect his family from persecution by the Vichy government, he adopts the pseudonym of Leclerc. De Gaulle, who has shrewdly assessed the officer's capabilities, sends him on a mission to Cameroun (26 August), followed by Gabon (12 November). As the Military Commander of Tchad, he carries out raids against Italian oases in Libya. The prise de Koufra on 1 March 1941, reveals his daring nature and leadership of men with whom he swears an oath that “we shall not lay down our arms before our colours, our beautiful colours, are flying above Strasbourg cathedral". De Gaulle makes him a Compagnon de la Libération. Promoted to the rank of Brigadier-General in August, the conquest of Fezzan allows him to establish a link through to Tripoli at the end of January 1943, with the British 8th Army commanded by Montgomery, under whose orders he participates in the la Tunisian campaign. In August 1943, De Gaulle asks him to take command of the 2nd Armoured Division (Division Blindée – DB), to be formed in Morocco. The cohesion and unity of this division, which is remarkable for its diversity (22 nationalities and 3,600 soldiers from the French Empire), with men and women of all religions, beliefs and from all walks of life, are forged by its leader. At the end of 1943, Leclerc and his unit are chosen by de Gaulle to liberate the capital. With de Gaulle having convinced Eisenhower to allow the 2nd Armoured Division to participate with American forces in operations in Normandy, the 2nd Armoured Division lands with Patton's army on 1 August 1944. After the taking of Alençon, they are involving in closing the Falaise pocket. After receiving orders from Bradley on 22 August, Leclerc and his unit storm towards Paris and he accepts the enemy's surrender. In his eyes "The France of de Gaulle, which refused to lay down its arms, meets up with the France of the interior, which refused to come to heel[..] In my eyes and those of our soldiers, since 25 August 1944, the Parisian has been a friend encountered on the most beautiful of battlefields…" They then continue pushing eastward to liberate Strasbourg on 23 November 1945, thus honouring their oath sworn in Koufra. This epic journey ends on 5 May 1945 at Hitler's Eagle's Nest near Berchtesgaden. As Head of the French Expeditionary Force in the Far East, Leclerc signs the Japanese instrument of surrender on France's behalf on 2 September. In Indochina and then in North Africa, he casts a lucid eye on the political evolution of populations due to the upheavals of war and regarding the need for greater autonomy. This brilliant career is cut short by an aircraft accident on 28 November 1947. He is posthumously promoted to the rank of Maréchal de France on 27 June 1952.