This necropolis, developed post-war, contains the bodies of 728 British soldiers.
The British cemetery at Vendresse is located next to the main D967 road between Vendresse-Beaulne and Cerny-en-Laonnois. It is situated to the south of the former sugar factory at Cerny-en-Laonnois and is a reminder of the British presence on the Chemin des Dames from the 13th September to the 16th October 1914 (8th, 21st and 50th divisions), as well as in May 1918, when Ludendorff launched his fourth, spring offensive. Amongst the dead of the 27th May, we note the presence of numerous officers, such as Lieutenant Colonel James Thomson of the 5th battalion of the Yorkshire Regiment, awarded the Distinguished Service Order and the Cross of War. There is also Brigade General Ralph Husey, who died three days later, commander of the 25th Infantry Brigade London Regiment (London Rifle Brigade), in France since the 4th November 1914, wounded four times and awarded the Distinguished Service Order with a bar and the Military Cross.
This necropolis, developed post-war, contains the bodies of 728 British soldiers, amongst whom more than half have never been identified. Most of these servicemen died in 1914 or in 1918. Surrounded by a wall made of millstone, the cemetery occupies a surface area of 2,188 m2. The site of Vendresse brings together all the temporary British graves from the Chemin des Dames sector, which were reunited after the armistice: the French military cemetery at Beaurieux where 16 British servicemen were buried by the Germans between May and July 1918; two British servicemen, one who died in 1914 and one in 1918, from the French military cemetery at Bourg-et-Comin; the French military cemetery at Craonne (Californie) where the Germans buried a British soldier in May 1918; the 16 British men from 1914 from the church cemetery at Moussy-sur-Aisne; the church cemetery at Oeuilly (4 graves from 1914); the 50 brave men from 1914 from the church cemetery at Troyon; the military cemetery at Verneuil (Château) where, in 1914, 16 soldiers died at the medical post set up in the Château; the church cemetery at Verneuil: a soldier from 1914. Individual monuments have been built in memory of 3 soldiers thought to have been buried here in unnamed graves; and other special memorials recall the names of around fifty servicemen from the United Kingdom whose graves were destroyed in subsequent bombardments. For 37 of them, the tombstones on the common graves read: "Buried near this spot"). British and French graves can also be found in the Vendresse village cemetery, near the church. The necropolis at Vendresse is managed by the Commonwealth War Graves Commission.
Access Vendresse-Beaulne is a village located 16 kilometres to the south of Laon. The British cemetery at Vendresse is 800 metres to the north of the village on the western side of the road to Laon. Commonwealth War Graves Commission Site: www.cwgc.org
> Return to results 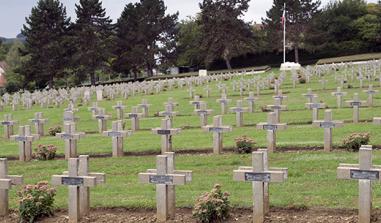