Mourmelon-le-Petit National Cemetery contains mainly the remains of French soldiers killed in the Champagne offensive, in September 1915. Nearly 1 500 bodies are buried here in individual graves. Attached to the field ambulance installed in Mourmelon-le-Petit, the cemetery was established in 1915 and laid out at the end of the war. In 1931, the remains exhumed from the temporary military cemeteries of Mourmelon-le-Grand and La Sapinière, Baconnes, were transferred here. One French serviceman killed in 1940 is also laid to rest here.
Many of the soldiers buried here belonged to different infantry regiments and, to a lesser extent, to territorial infantry and artillery regiments.

Despite the French push across the Marne in September 1914 and the efforts to outflank one another, the armies advanced little and the front stood still. The “Race to the Sea” was a failure. To protect themselves from artillery fire, the belligerents dug in. This was the start of the static war. A place marked by the military presence, the Mourmelon military camp then became a major centre of military activity in the Great War.

The battles of Champagne in 1915

In the winter of 1915, General Joffre launched a series of attacks in Champagne intended to chip away at the German lines. Located in the sectors of Souain, Perthes, Beauséjour and Massiges, these were very bloody operations. Yet despite these attacks, the front didn’t budge.

In the summer, to break the deadlock and provide support to the floundering Russians on the Eastern Front, Joffre decided to conduct a fresh offensive. Supported by another operation in Artois, it took place on the vast, arid chalk plain of Champagne, on a front spanning 15 miles, from Auberive to Ville-sur-Tourbe. It was carried out by the 2nd and 4th Armies, against the Germans of the 3rd Army, who were dug into solid trenches. Further back, on the opposite slope, was a second position, hidden from aerial reconnaissance and out of range of the artillery.

After an artillery bombardment lasting three days, the attack was launched on 25 September. The bombardment left the first lines in total disarray, making it easy for the French to take them. Despite a few points of resistance, namely at the Butte du Mesnil, progress was rapid. But the momentum was broken by the second position, which remained intact. The entire front became a bloodbath. The exhausted troops had to go on fending off powerful counter-attacks, during which the two armies lost 138 000 men. By November, disastrous weather conditions and the sheer scale of the losses forced Joffre to abandon the idea of carrying out further attacks. Aside from a handful of limited operations in 1916, the front saw a period of relative calm.

Launched to the northeast of Reims, between Prunay and Auberive, this operation supported the French offensive carried out on 16 April 1917 at Chemin des Dames. The aim was to take the chalk massif of Moronvilliers, which rose to a height of 260 metres above sea level. Since 1914, the Germans had occupied the massif, from where they were able to observe behind the French lines.

At dawn on 17 April, with slush under foot, the French attempted to take this stronghold. But the massif remained in German hands. With a great deal of effort, the French troops liberated the village of Auberive and took Mont Sans Nom, Mont Cornillet, Mont Blond, Mont Perthois and Mont Haut. Unfortunately, they failed to take two other strategic positions: Le Casque and Le Téton. By 20 May, the French had secured a partial victory with this offensive. This hard-won sector would be strategically evacuated on 15 July 1918.

The German offensive of July 1918 put this front once more at centre stage. Reims, under continuous fire from German artillery, came under threat once again. But General Foch, engaging all of his forces from the Meuse to the North Sea, conducted a broad manoeuvre to circumvent the Aisne front. In Champagne, supported by the Americans, General Gouraud’s 4th Army took many positions in the Navarin sector and at Sommepy. Pressing on towards Mézières and Sedan, the Franco-American forces made rapid progress to the Ardennes, where they broke through the enemy lines. On a front of 250 miles, Foch’s armies went in pursuit, hounding the enemy until 11 November 1918.

Today, the Suippes-Mourmelon area preserves the memory of this bitter fighting in the Marne, through the ruins of the villages of Perthes, Hurlus, Mesnil, Tahure, Ripont, Nauroy and Moronvilliers, along with 18 cemeteries.

Mourmelon-le-Petit
14 miles north of Châlons-sur-Marne, on the edge of the village, adjoining the village cemetery 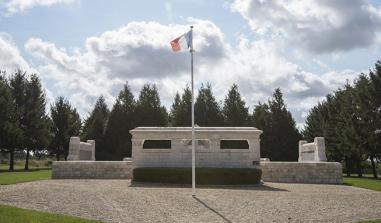 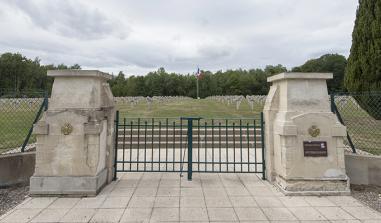 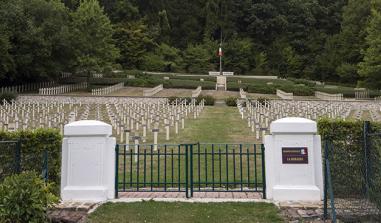 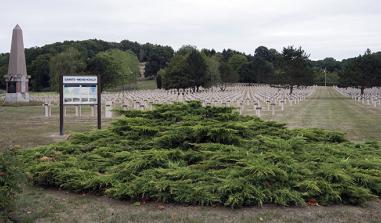 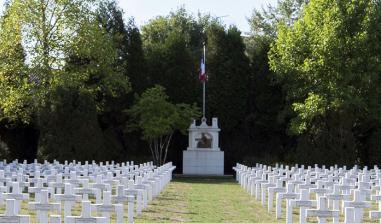