>In Île-de-France, remembrance tourism is a sector undergoing considerable change. Building on the First and Second World War commemorative cycles, the region has seen, on the initiative of actors like the Ministry of the Armed Forces, the gradual integration of its remembrance sites and cultural offering.

Île-de-France has always formed the backdrop for the decisive moments in the country’s history. The Franks established their capital in Paris as early as the 6th century. Later, the French monarchy lived here, first at the Louvre, then at Versailles. With the French Revolution, the seat of power returned to Paris, and since then has left it only temporarily, during the Paris Commune and the two world wars.

A region marked by contemporary conflicts

Alongside its glorious history, the region also has its share of sites linked to dramatic events in contemporary conflicts: Champigny-sur-Marne, where one of the bloodiest battles of the Franco-Prussian War took place in 1870; Drancy and Cité de la Muette, the point of departure for most of the 74 000 Jews deported to the death camps between August 1941 and August 1944; or Paris’s Charonne metro station, where a demonstration against the OAS and the Algerian War was brutally repressed in February 1962. As everywhere in France, places of remembrance and contemplation have appeared over the years to honour the civilian and military heroes and victims of these conflicts.

For example, the Tomb of the Unknown Soldier, installed beneath the Arc de Triomphe, in Paris, on 11 November 1920, has national significance. In the wake of the First World War, local communes also paid tribute to their own war dead. In the 1920s, some 35 000 war memorials were built, despite the difficulties of reconstruction. Only a handful of communes did not have a memorial, including Paris, where on 11 November 2018, a monument was unveiled to the 94 415 Parisians killed in action and the 8 000 who went missing. Installed on the outer wall of Père Lachaise cemetery, on Boulevard de Ménilmontant, it is over 280 metres long.

After the Second World War, individual plaques (over 1 000 across Paris) were laid in honour of combatants and victims. Many were unveiled on 25 August 1944 to remember the heroes of Liberation. Each plaque is laid on the actual site where the event took place, and often bears the inscription “Here died...”, thus combining personal remembrance with the collective remembrance of a group, town or country.  If the memory of the two world wars is tangible in the landscape and on the walls of the towns and cities of Île-de-France, in recent years museums and memorials have added to the remembrance offering.

The role of these sites is to provide elements to aid visitors’ comprehension. As such, they are frequently renovated to adapt to the needs of new audiences, in particular schoolchildren. One of the first to open in the region, in 1985, was the Musée de la Résistance Nationale, in Champigny-sur-Marne, whose collections have grown since 1965 with the addition of thousands of public and private donations. Charting French social history from 1929 to 1947, the number and variety of pieces on display make this a unique collection on the French Resistance. The museum is currently undergoing major renovation work and is scheduled to reopen in 2020.

The Mémorial du Général Leclerc de Hauteclocque et de la Libération de Paris - Musée Jean Moulin, installed in the mid-1990s above Paris-Montparnasse railway station, sheds light on the Liberation of Paris. With a redesigned layout, the museum is due to be officially reopened on 25 August 2019 at a new site, Place Denfert-Rochereau, where Colonel Rol-Tanguy, commander of the French Forces of the Interior (FFI), had his underground headquarters.

Other sites, particularly in Seine-Saint-Denis, have been put to a variety of uses by the State, regional authorities and remembrance organisations since the war. In Drancy, for example, an interpretation centre was created in 2012, overlooking the Cité de la Muette, by the Shoah Memorial, whose Paris site opened on 27 January 2005. Since 2011, the town of Bobigny has offered tours of the old railway station, from which dozens of convoys of deportees departed between March 1942 and August 1944. Remembrance and landscaping works are set to complete the offering.

As far as the First World War is concerned, a museum with a rich collection was opened on 11 November 2011, in Meaux: the Musée de la Grande Guerre. The furthest point of the German advance, Meaux and its neighbouring communes possess historic heritage which, until then, had been undervalued and was little known to the general public. The museum is a reminder of how close the front came to Paris. Besides its historical legitimacy, the museum, like any major structure, plays the role of a lever of development for the region. There are also more intimate sites that preserve the memory of the Great War, such as the Musée Clemenceau in Paris. Restored in 2017, the museum is comprised of Clemenceau’s apartment and a documentation room on the floor above.

A heritage that engages the Ministry of the Armed Forces

The Ministry of the Armed Forces, through the Directorate for Heritage, Remembrance and Archives (DPMA), plays an important role in the development of this historical and remembrance heritage in Île-de-France. The French State’s number-two cultural actor after the Ministry of Culture, it is responsible for a number of museums and memorials concerned with the history of contemporary conflicts, including ten in the Paris area: five major museums (the Musée de l’Armée, Musée National de la Marine, Musée de l’Air et de l’Espace, Musée du Service de Santé des Armées and Musée de l’Ordre de la Libération), three Major National Remembrance Sites (the Mont Valérien Memorial, the Memorial to the Martyrs of Deportation and the National Memorial to the Algerian War and the Fighting in Morocco and Tunisia), an ossuary containing the remains of French and German soldiers killed in the Franco-Prussian War of 1870-71 (Champigny-sur-Marne), five cemeteries in Seine-et-Marne containing the graves of 2 414 soldiers killed in the First World War, as well as nearly 2 400 graves in 30 military plots in local cemeteries across the Île-de-France region. Many of these sites have undergone major renovation work in recent years. Set at the heart of the Hôtel National des Invalides, the Musée de l’Armée has seen a number of renovations, not least the creation of its WW1 and WW2 rooms, followed by the opening of the Historial Charles de Gaulle, an interactive multimedia space devoted to the actions of the leader of Free France and later founding president of the Fifth Republic. After works lasting several years, the Musée de l’Ordre de la Libération reopened in 2015.

Wide-ranging works and projects have similarly been undertaken at Major National Remembrance Sites and military cemeteries, such as the overall redesign of the Memorial to the Martyrs of Deportation in Île de la Cité and the creation of new museum areas, new signage and a learning area at Mont Valérien. The military cemeteries of Chambry and Chauconin-Neufmontiers, the latter a listed historic monument where, among others, Charles Péguy is buried, were restored as part of the centenary commemorations. Finally, large-scale works are under way at two major defence museums: the complete renovation of the Musée National de la Marine in Le Trocadéro, and the refurbishment of the Salle des Huit Colonnes at the Musée de l’Air et de l’Espace in Le Bourget.

The heritage of the armed forced also offers rich and varied cultural, scientific and educational programmes, like the “Rendez-vous du Mont-Valérien” conferences and the “Picasso and the war” exhibition at the Musée de l’Armée, which contribute to the region’s remembrance dynamic.

Integrating the region's historical offering and structuring the sector

The First World War centenary and the 70th anniversary of Liberation contributed to a growing interest in remembrance tourism. Visitor numbers to museums, memorials and interpretation centres equipped with visitor areas have increased year on year in metropolitan France compared to the previous period of commemorative cycles (up 25% on 2012 and 2013).

Normandy remains the most popular remembrance region, followed by Île-de-France, due to the pull of Paris’s world-renowned museums and memorials. Of the 16 most visited sites in Île-de-France in 2018, three were sites linked to the history of contemporary conflicts: the Arc de Triomphe, in sixth position, with nearly 1.7m visitors (+6.4%/2017); the Musée de l’Armée, in ninth position, with over 1.2m visitors (+2.7%); and the Pantheon, in 15th place, with nearly 0.86m visitors (+19%). Meanwhile, some sites suffer problems of access and receive a mere 10 to 15 000 visitors per year, despite the quality of their offering.

This specific cultural tourism needs to be integrated with the general offering, in particular the historical one. The website of the tourist board for Paris and region promotes those sites that are connected with the major figures or events of French history: Louis XIV, Napoleon and the First World War. The Second World War is little represented.

offering. To that end, the Ministry of the Armed Forces has been working for a number of years on developing networking between museums and other cultural and tourist sites. Since 2014, it has contributed to the modernisation and creation of some 20 projects across France, including five in Île-de-France. Two are now complete: the Monument de l’Escadrille La Fayette and the Musée Georges Clemenceau. Three are under way: the transfers of the Musée du Général Leclerc de Hauteclocque et de la Libération – Musée Jean Moulin and the Musée de la Résistance Nationale in Champigny-sur-Marne, and the renovation of the old railway station of Bobigny.

The ministry contributes to development projects through a call for defence tourism projects entitled “Innovative digital services for historical and remembrance tourism in France”. There have been 16 successful applicants in two editions (2016-2018), including a project for an augmented tour of the Battle of Ourcq by a chatbot (interactive conversational assistant), at the Musée de la Grande Guerre in Meaux.

It also works to professionalise those involved in remembrance tourism, by holding seminars as part of the Museums and Memorials of Contemporary Conflicts (MMCC) network, which to date brings together nearly 130 sites across the region. Towards the end of 2019, study days will be held in Île-de-France to look at issues relating to the renewal of museum sites and spaces, and to discuss their links to the local community.

Pursuing this structural work, in conjunction with all the partners involved, such as the tourism ministry, local authorities (the regional authority, Paris city council, Greater Paris, etc.) and the sites themselves, is thus the main focus for the coming years. A number of areas will need to be developed. A discussion needs to take place aimed at creating greater interaction and historical coherence with neighbouring regions marked by contemporary conflicts (Normandy and areas of the former First World War front line) and integrating remembrance sites with the region’s network of historical sites, in order to make the offering more visible. The sector could be better structured if a discussion is held with stakeholders about issues linked to developing visitor welcome, mobility, outreach and promotion across the regions. Finally, it is vital for these remembrance sites to be used to promote national cohesion, by developing and passing on a shared memory based on shared values.

Located in Paris’s 16th arrondissement, Musée Clemenceau is set in the house where “The Tiger” spent the last years of his life. On the ground floor, visitors can see the great man’s apartment, preserved as it was the day he died. On the first floor, a documentary gallery compiled from many archives charts Georges Clemenceau’s life and work. Renovated with financial assistance from the Ministry of the Armed Forces, it opened in November 2017. Museum of the Liberation of Paris
Paris 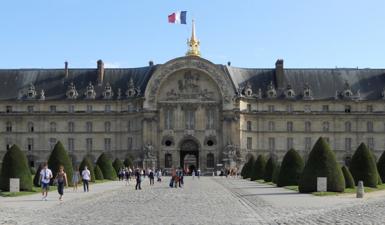 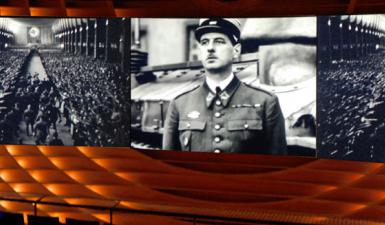 National Museum of the Navy
Paris